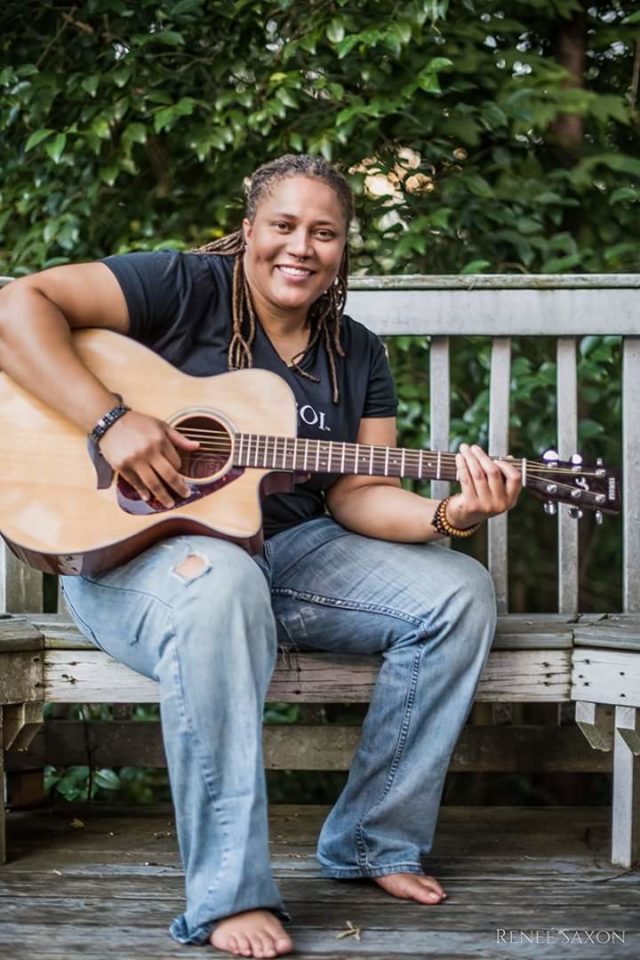 Angela Aldrich has a long history of facilitating the heart to heart connections and communication she values—she spent 14 years in sports medicine and 15 years in mental health. She recently returned to North Carolina from living in New York City where she pursued her dreams of being a full-time musician. Still on a vision quest, Angela seeks to incorporate her gifts as a healer and musician.

“I am unfolding. I am letting go of layers that I no longer need, that no longer serve me and I am opening up and expanding into who I am called to be. So, that’s truly where I am at this point. So, I’m very excited and I’m listening. I’m doing a lot of listening right now and working on being still.”

Listen to the interview here:

Growing up with Big Mama:

Angela grew up on her great-grandmother’s farm in Cleveland County, North Carolina. Her great-grandmother Willie Mae Crank (aka Big Mama, maiden name Willie Mae Dawkins) (June 26, 1901-March 21, 1991) was the “matriarch, the root of everything for my family.” Although they called her Big Mama, “she was about 4 feet 11 and a silent lady. Very strong, very much a powerful presence, but silent.” Big Mama and her husband, Big Daddy sharecropped and as a result were able to purchase land. Big Daddy died of pneumonia from working in the fields. Big Mama raised Angela’s mother after her mother moved to D.C. As a result, Angela was fortunate enough to grow up with her great-grandmother until she was 16-years-old. Her childhood revolved around Big Mama’s schedule of hard work Monday-Friday, going to “town” on Saturday’s and church on Sunday’s. Big Mama woke to the rooster and went to bed with the setting of the sun.

“My great-grandmother she is the matriarch of our family and the root of everything for my family. So, being in the Southern Baptist Church and being a part of it, participating in the church and bringing your time, treasure, and talent to the church, following her lead was something that was a must. Just having a respect for an outside God was what my great- grandmother really instilled. Like the fact that we don’t wake ourselves up in the morning and that we are provided for at all times.

I’m grateful for the reference and the foundation of and the constant scriptures, the constant song, the richness of teaching me my culture through that avenue of the Southern Baptist Church. I’m so grateful for because that was center for her that was everything for her. It was centered around the church. Everything was about when we would go to church and what we would be doing in church, everything. Every single day was linked to the church.

What’s interesting is as I’ve gotten older knowing that as I’ve evolved more into an understanding that spirit is within just as spirit is everywhere but within and I am also a co-creator with spirit. Being able to recognize a power that I share with God in the image of God and to be able to recognize and understand that my great-grandmother although she isn’t here in the physical, her energy and her spirit is still forever with me and forever alive. So, just being able to go back to that and to know that. And then to think about her grandmother and her great-grandmother and once again the richness of a culture that is very powerful reminds me every day of my power and who is with me and that helps a lot when I’m stuck. It helps a lot when I’m fearful and when I’m going through. So, seeing her, seeing my grandmother right now as an ancestor that is with me is everything, it’s everything.”

I didn’t know until I got older but she actually had an edible garden. There were so many trees in her garden and on her land that we actually ate from and we also preserved. Big Mama had an 11 room house and she had an underground cellar that we would preserve the muscadines from the trees and we would gather the pears and the peaches and the apples and we would actually make preserves in cans with the mason jars. Actually, can, we would actually can the corn and tomatoes and things from the garden and okra.

I remember sitting on the porch a lot. And of course we were the labor. So, we did the shucking corn and the pea shucking and everything else. They would cook them and heat them to temperature and get the jars ready and we would label the jars and we would run around to the cellar and place them on the shelf. We did a lot of that. There was a lot of that.

I just remember Big Mama being silent. You always watched her to see what she was doing and you just wanted to imitate it. You just wanted to go where she was going and do what she was doing. Even as kids we wanted to do that. Like I said, she was very much a planner and she would prepare in advance. So, we were taught to prepare things in advance. She had hogs and chickens. So, it was nothing for Uncle Son to kill a chicken and we would pluck the chicken and we’d fried the chicken. That was pretty much the upbringing.

My great-grandmother, also I remember her checking me a lot and checking the kids a lot about saving and conserving and catching the water that would roll off the tin roof. She had these big barrels and buckets around her house that she always wanted us to save the water and to water the flowers with that and to save that in case we needed it. We also did our laundry outside with the big black pots under a fire with the fire underneath it and the lye soap with the big stick and swirling around the blankets and that kind of thing. I get excited talking about it.

Like I said, she was very much a worker and she just worked on the land and every now and then we were just really blessed to have a personal story about her childhood or to catch her humming a song or to catch her singing a song. And when she did speak to you it was a story about how to live and how to treat other people. She was older, just the way she respected other elders in the community that weren’t even as old as she was, just the respect that she taught us to have for them. It was always, “Run this up to such and suchs house or take this to such and suchs house,” you know some vegetables or something that they may need. It was a beautiful relationship that I had with her because now I look back and I see that everything for her was like a meditation. Everything no matter what she was doing, she was in constant meditation and it was so purposeful even when she prepared her same breakfast every morning.

When I also look back what I also appreciated is how she cared for the community and how she cared for the people in the community. So, even now I have such a warm spot for elderly around me and making sure they are okay. Making sure they are okay. I know even growing up my mom taught us that as well. She would send my brother up with clippers and say, “Go cut such and such hair for church tomorrow. Or go see if such and such needs anything for church tomorrow.” Or if I drive up to my mom’s house she would send me to an elderly person’s house, “Drive up there and see if they need you to go anywhere, if they need you to run an errand. Go up there and see if they need an errand run.” It was always being mindful of who’s around you and who community is and to look after and take care of the community. That was always a big thing.

I remember once asking her if she was a slave and she laughed at me. She laughed. To get my great-grandmother to laugh it was a big deal because her whole body shook when she laughed. It just made you feel like you just opened up the whole universe. I remember thinking maybe. I remember thinking maybe it’s a bad thing. Maybe I shouldn’t have asked and maybe you know… She did tell me no that she wasn’t a slave. But what I did hear later was that they sharecropped and from that, they did end up owning many acres of land in Cleveland County, North Carolina. But, I just remembered that I wish I had asked more questions after that but just to see her laugh it kind of threw me off and the fact that she was like, “No, I wasn’t slave,” you know? To me just something I needed to know as a kid I don’t even know why.

People no matter who they were they just respected that and so people would ask, because she was a regular, “How are you doing Ms. Crank?” She would not hesitate to stop and look you in your eyes and tell you every ache and pain and to tell you how she felt about the day, how she slept. She would tell you everything about how she was feeling. I learned to look at people as they were looking at their watches and thinking, I would think, “Don’t want to know don’t ask,” [Both laughter]. Because we already knew it was going to be at least an hour. We already knew that. But to watch the look on people’s faces as they would try to get out of that because you don’t want to interrupt her. I always said to them, “If you didn’t want to know you shouldn’t have asked.”

Grandmother’s Legacy Living Through Her Today:

I feel very strongly that she wouldn’t do anything different and I feel like it’s important. I look at the work that I can do now with what’s going on in the world, I’m so drawn and I’m so much of a believer in building these communities where we bring our gifts and our talents and our skills and our love for one another to these communities and to care for each. I think that is what it’s coming down to. There is just so much separateness and divide and we are taught that and we are trained to separate ourselves from one another and to divide.

I strongly feel that I’m not sure how well we are going to do with that system. So, when I look at what I was taught about going back to the land and pulling up water from the well and just living off the land and looking out for one another and we are all throwing our talents and skills in a pot and saying, “What do we need? Who needs this and who needs this and who needs this and looking out for one another?” I really do believe that is going to save us. That’s going to save. That real outpour of radical love, that love of giving up hoarding and collecting and thinking of ourselves and how much we can gather for ourselves and ours, our family and start looking at family as being a community. 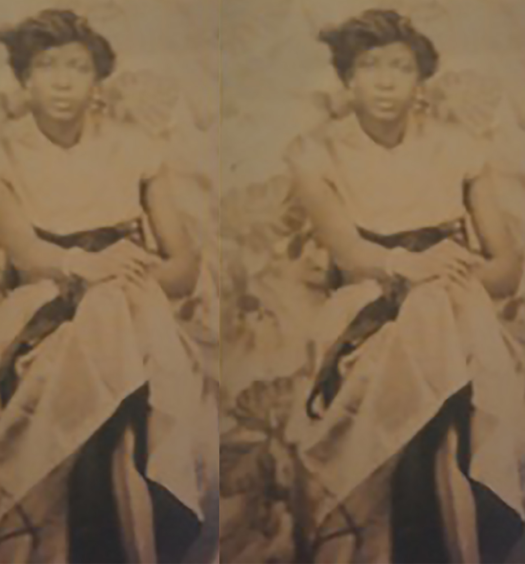 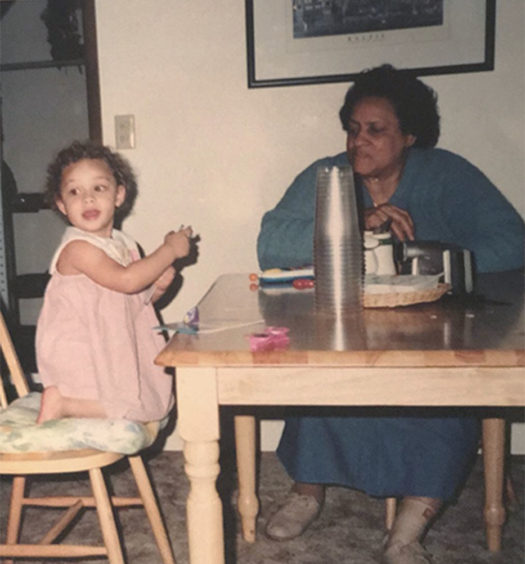