In 1968, Will Smith was born into a middle-class family in Philadelphia. Starting with rapping and then quickly transitioning into acting, his career skyrocketed into his current Hollywood stardom. His accomplished acting and music career has garnered many awards, including from Grammy, BET, Blockbuster Entertainment, Kids Choice, and more. 1

It’s no coincidence that every member of the Smith family has achieved significant success and stardom. Their ability to inspire each other is evident in the family’s influence on the music and acting industries. On various occasions, Will Smith references his grandmother as an unbelievable inspiration, providing direction and leadership in his life.

Smith’s grandmother provided direction and guidance to his rap career from an early age. When he was just 12 years old, Smith was writing poetry and rhymes in his journal. What he wrote was laced with profanity and inspired by popular rap groups. One day, his grandmother found his notebook. Smith found a message from his grandmother in the back of the notebook: “Dear Will, truly intelligent people don’t have to use words like this to express themselves. Please show the world that you’re as smart as we think you are.” 2 Not only was Smith inspired to rap cleanly, but he learned that his works and his words have an immense impact on the people around him, a message that would stick throughout Smith’s early career. This influence did not end with Smith—a lack of profanity is also evident in his son’s lyrics. His grandmother’s thoughtful words have lived through multiple generations.

Along with his rap career, Smith’s grandmother inspired his spiritual life. According to Smith, she represented his “connection to God.” 3 Smith was proud to discuss his grandmother’s commitment to her faith through her involvement in her church by teaching children and putting on Christmas plays. He further boasted about how she was the “most spiritually certain person” that he had ever met. Once again, his grandmother’s influence, in terms of her faith, carried over to not only Smith’s religion, but also his professional career. When filming the film Concussion, which retold the story of Dr. Omalu’s discovery of CTE in retired professional football players’ brains, Smith was able to meet with Dr. Omalu personally. Dr. Omalu recounted that he and Smith, “shared and communed the love of God.”3 For Smith, this experience can be traced back to his grandmother’s impact on his religious beliefs.

Unfortunately for Smith’s family and community, his grandmother passed away. Smith was at peace when his grandmother passed away because even when she was dying “she was happy, like she was really excited about going to heaven.”3 Although her physical presence is no longer, her impact and the life lessons that she imparted continue to play a significant role in Smith’s life. Smith is often found quoting his grandma’s inspirational quotes and finding ways to apply them to his personal and professional life. A lesson that his grandmother once taught him and continues to keep him grounded is, “Don’t let failure go to your heart and don’t let success go to your head.”

Smith’s grandmother’s direction, guidance, and spiritual influence on his life and career provide insight into the versatile role played by women in African American families. Black mothers demanding work responsibilities (they’ve had and have higher labor force participation rates than whites) had meant that grandmothers have shared in the role of raising children. Not only do many of these women help their families, but also they provide support to their communities. Smith’s grandmother demonstrates the continuation of this legacy. 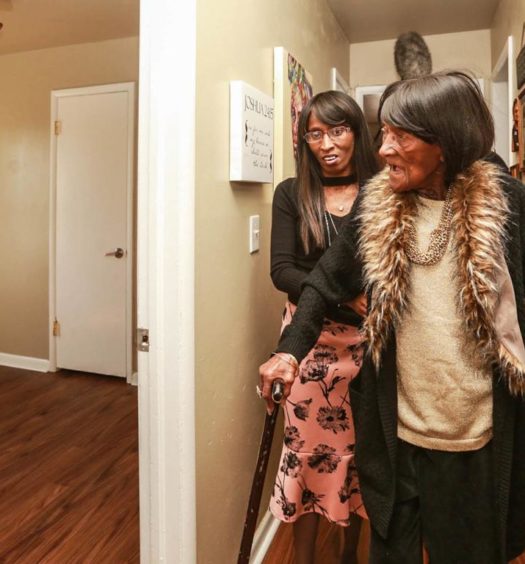 IN THE NEWS: LESSIE BENNINGFIELD RANDLE